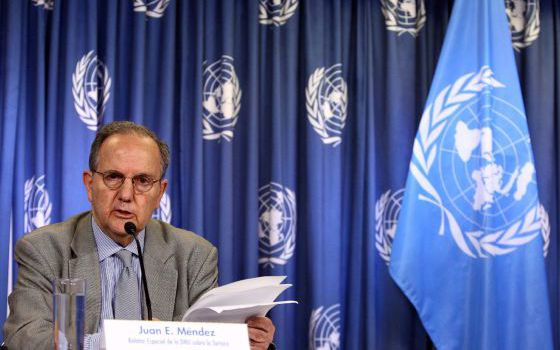 The UN Special Rapporteur on Torture has published a damning report of his visit to Sri Lanka in 2016. The report urges States not to return people fleeing persecution, particularly Tamils, to Sri Lanka.

According to the latest report by a top UN envoy, Tamils and other individuals forcibly returned to Sri Lanka could face ‘white van abductions’ and forms of torture including sexual violence.
In the report, published on 25 January 2017, the Rapporteur urges the international community to stop returning Tamils to Sri Lanka where they will be at risk of torture and other cruel, inhuman or degrading treatment and punishment.

The UN Special Rapporteur on torture and other cruel, inhuman or degrading treatment or punishment, Juan E. Méndez, went to Sri Lanka in early 2016 to assess recent developments and identify challenges within the national justice system.

Méndez and his team conducted a number of interviews and investigations there. While the practice of torture may be ‘less prevalent’ today than during the civil war, they concluded that a ‘culture of torture’ is still pervasive. This is true both in the regular Criminal Investigations Department and investigations falling under the controversial Prevention of Terrorism Act (PTA).
Tamils and any individuals or families thought to be linked to the Liberation Tigers of Tamil Eelam (LTTE) are particularly at risk. The report identifies a ‘causal link”’between perceived threats to national security and the level of physical suffering inflicted during detention and interrogation under the PTA.

Key findings of the report

The Special Rapporteur’s report recommends that the Sri Lankan government should immediately repeal the PTA. The government should enact legislation that safeguards against cruel or arbitrary arrest, interrogation and detention.

Méndez also urges Sri Lanka to ratify and implement the Optional Protocol to the Convention against Torture, and other key international instruments. Other recommendations include ensuring minimum standards of conditions of detention, abolishing capital punishment, and amending the Police Act.
On the international level, Special Rapporteur Méndez makes two strong recommendations.

The first is that the international community support the timely implementation of the recommendations made in the report, as well as those made by other UN mechanisms.

The second is that the international community ensure that the principle of non-refoulement is upheld. The Special Rapporteur requests that persons fleeing persecution, particularly Tamils, are not returned to Sri Lanka. Méndez emphasises that this is necessary to respect article 3 of the Convention against Torture, making it a legal responsibility for many countries, including Australia.