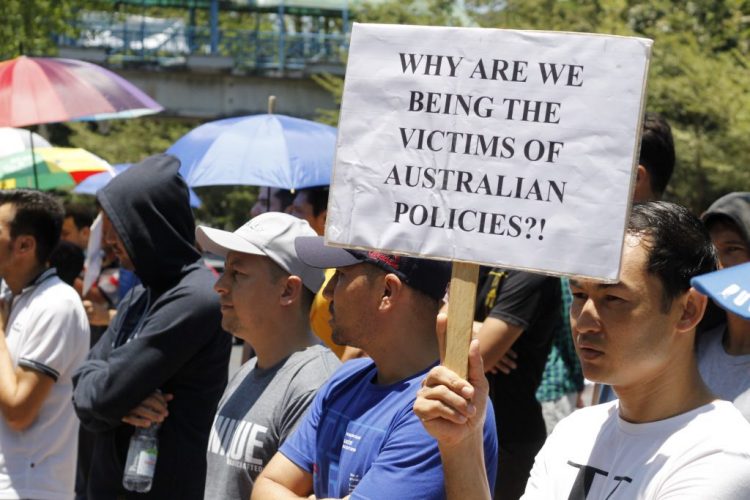 Outline issues of refugees in Indonesia

There are approximately 13,700 refugees currently stranded in Indonesia, unable to access any form of durable solution. More than half of them — about 7,600 — are refugees from Afghanistan who are mainly ethnic Hazara, The rest are refugees who have sought protection from Somalia, Iraq, Myanmar, Sudan, Sri Lanka, Yemen, Palestine, Iran, Pakistan, Eritrea and Ethiopia.

For the vast majority of refugees and asylum-seekers in Indonesia, the country was only ever intended to be a transit point for them en-route to a final destination in a third country. However, most people have found themselves stranded due to a lack of pathways to safety.  Indonesia has not proved to be a transit country, as most of these refugees have spent more than eight years there, in some cases up to 13 years. These stranded refugees face a number of severe challenges, all of which have been exacerbated by the global pandemic.

Above all, they feel trapped in limbo.

They cannot return to their country of origin – Afghanistan once again under Taliban rule – and they cannot remain long-term in Indonesia, as Indonesia is not a signatory to the 1951 Refugee Convention. This means that their only option is to sit and wait for resettlement to a third country. However, waiting times for resettlement are extremely lengthy, and only very limited places are available.

Refugees in Indonesia face significant mental health problems, and suicide is increasing. These desperate circumstances have led many refugees to protest outside of UNHCR offices in Indonesia. A few weeks ago, a 22-year-old man set himself on fire in protest at the restrictions on education, work and exercise, and prolonged waiting time in Indonesia. Last week, several people sewed their lips in protest. In the last three years around 13 refugees have killed themselves in Indonesia, and many more have died of natural causes or become homeless. Addressing this issue should be a priority for the Indonesian Government, UNHCR and the international community.

While refugees are protesting outside UNHCR offices in Indonesia and demanding resettlement, it is important to underscore some of the challenges with resettlement. First, it is not the UNHCR, but countries, offer resettlement places annually. Last year, only 34,400 out of 21 million refugees were resettled around the world, while UNHCR identified that almost 1.5 million refugees were in desperate need of resettlement. This stark figure highlights the reality that resettlement is out of reach for most refugees around the world. The role of the UNHCR is to register refugees, assess their refugee claims, and then refer them for resettlement to different states. The UNHCR does not have control over these allocation numbers. However, UNHCR can improve refugees’ understanding of these limitations by improving communication with refugees in Indonesia.

The global pandemic has changed the entire global governance system, and the uncertainty of the virus and the new variants means that countries have implemented strict border controls. For this reason, many people who have been granted refugee or humanitarian visas have not yet been able to travel to their new country. Lastly, for all the work that the UNHCR does and can do, they do not have a remotely adequate budget. The UNHCR has limited funds to support refugees in Indonesia. States should work with UNHCR to increase its capacity to give refugees the support they desperately need.

Many refugees, in particular young people, avoid playing sports, engaging in constructive activities and even going to school and getting an education in the belief that doing so may affect their opportunity of resettlement in a third country. They want to portray themselves as victims in order to demonstrate they are needy or vulnerable. It is a terrible state of affairs when refugees with the talents, skill and knowledge to do all kinds of wonderful things limit their abilities by presenting themselves as vulnerable. The UNHCR should meet people on the ground and explain in clear and comprehensible terms the challenges they face in funding and resettlement. A good first step was the meetings they held last week with refugee community members.

The UNHCR also needs to take the refugees’ mental health seriously. Sometimes some demands from refugees are unrealistic, particularly regarding resettlement, and if not sensitively addressed will lead to further suffering, pain and protests. The UNHCR can work together with refugee communities to promote their mental health and encourage constructive community activity.

The overwhelming challenge for refugees in Indonesia is that their inability to be resettled means they are trapped in uncertainty. They also lack formal work rights, without which they cannot achieve sustainable livelihoods. Working irregularly in Indonesia is uncommon among refugees and asylum-seekers, as there is often the risk of exploitation and crackdowns by immigration authorities — those who are caught by authorities face detention, and potentially deportation. There are examples of refugees being underpaid or not being paid at all for their labour.

Furthermore, refugees have limited rights to obtain education. By way of contrast, in Iran all children have access to primary and secondary education regardless of their documentation status. The UNHCR partners with the Government of Iran to facilitate refugees’ access to quality primary and secondary education. A similar model can be established in Indonesia, where with financial aid UNHCR can also partner with the Government of Indonesia to support and facilitate refugees’ access to quality primary, secondary and tertiary level education in the country.

While Indonesia sees itself as a transit country, refugees in Indonesia are not in transit. They have been stuck in limbo for years, and they need a permanent solution. In recent years Indonesia has been relatively progressive. In 2016 the Indonesian government clarified the status of refugees through a presidential decree. Indonesia also moved away from widespread immigration detention and, although not a signatory to the 1951 Refugee Convention, acknowledges the principle of non-refoulement in its own laws and administrative decrees. Nevertheless, despite the increasingly permanent refugee population in Indonesia, the government continues to assert that asylum in Indonesia is temporary and that refugees will move on to their destination, even though resettlement pathways are increasingly limited.

The Australian, US, New Zealand, Canadian and other governments must increase their refugee intake from Indonesia and accelerate processing times. These refugees are a skilled and determined workforce and want to join the COVID affected labour market. They can contribute to the economy of resettling countries.

Australia, despite its introduction of a restrictive border policy to prevent refugees arriving by boat from Indonesia, can and must play a regional leadership role in the resettlement of refugees. There are many refugees – mostly women and children – whose husbands and fathers arrived in Australia by boat. Under the current policy these men cannot bring their families from Indonesia, simply because they themselves had arrived as refugees by boat. The UNHCR should work with the Australian government to reunite refugees with their family members in Australia. Australia must not continue to punish refugees through family separation.

It is in everyone’s interests to allow refugees in Indonesia to be economically active, by allowing work and education and supporting their mental and physical health. And it is in the interests of resettlement countries, as well as of the refugees themselves to give people the hope of a future in which, reunited with their families, they can pursue education and productive employment in safety.

Sitarah Mohammadi is a former Hazara refugee from Afghanistan, who spent 2019 as a Provost Scholar at the University of Oxford, undertaking studies in International Relations, and completed a dissertation on Australia’s refugee policy. She has a BA in International Relations and Human Rights, and is currently undertaking her Juris Doctor (Law) at Monash University Law School in Australia. (Twitter: @sitarah_m)

Sajjad Askary is a former Hazara refugee from Afghanistan, has a BA graduate in International Relations, and is a current student of Juris Doctor (Law) at Monash University Law School in Australia. (Twitter: @askarysajjad)