Labour migration as complementary pathways for refugees in the Asia-Pacific 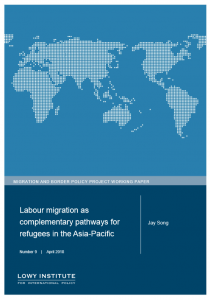 Jay Song of the Lowy Institute has published a paper examining the nature of labour migration in the Asia-Pacific region, and its relationship to pathways for people seeking asylum. The paper aims to identify ways in which countries can extend legal labour-based schemes to refugees and people seeking asylum, who might otherwise be at risk from people smugglers and human traffickers.

The largest numbers of labour migrants tend to come from less economically developed countries (such as the Philippines, Indonesia, Cambodia, Myanmar, Vietnam) to

Labour migrants tend to be of working age and capacity, with gender ratios varying between countries of origin. There is some difficulty in determining gender statistics, however, as many South-East Asian women migrate to wealthier countries as foreign brides, which involves undocumented labour in the form of domestic and care work. Aging populations and declining fertility rates in ‘receiving’ countries, such as Japan and South Korea, allow for the influx of migrant workers to help meet labour demand.

The report examines the framework of labour migration in six countries:

It aims to gauge the capacity and appropriateness of incorporating people seeking asylum into the existing labour migration process. In judging this, both local business demand and international humanitarian expectations must be taken into account. Labour arrangements most commonly exist between countries in the form of Memorandums of Understanding. These take on varied forms, generally tailored to ensure reciprocal benefits.

Current labour migration agreements between countries are often inadequate in protecting vulnerable people seeking asylum. Countries such as Myanmar have relatively underdeveloped laws which fail to protect their international workers from exploitation. With ethnic conflicts and the mass exodus of refugees from Myanmar

In Thailand, there are other forms of accommodation for people seeking asylum, outside of the country’s official framework. This informality risks arbitrary and unjust arrangements. This is exemplified in the fact that people from Myanmar and Cambodia are allowed to remain and work in stable periods, yet have been deported in recent times under the military junta.

Labour migration agreements in the six countries focus on particular economic concerns, rather than humanitarian protection. While economies are obviously of great concern, their predominance reflects the present unsuitability of labour migration as an alternative pathway for refugees.

Countries across the region should develop hybrid models, striving towards both humanitarian and economic benefit, rather than ‘cherry-picking’ the skills of some refugees. Such schemes should not replace existing humanitarian quotas. They should work towards protection for people seeking asylum, as well as empowering them with work.

States need to communicate better to ease community concerns of potential dangers and to ensure national security. They should strengthen bilateral and multilateral mechanisms for sharing information about individuals’ criminal activities. This will ensure that safe and legal pathways for refugees can be sustained.

Business and civil society, in partnership with governments, have the opportunity to create and enhance complementary labour pathways for refugees. This would involve:

With the support of business communities, countries (such as many in South-East Asia who are not signatories to the Refugee Convention) could use labour migration as an alternative refugee pathway.

As a democratically advanced, prosperous nation and co-chair of the Bali Process, Australia can have a significant impact as a voice in the region, particularly at the upcoming United Nations Global Compacts.

With a strong record of criminal justice, Australia can lead developments in migration regimes in the region, ensuring access to legal mechanisms and protection. It can also lead international cooperation in the sharing of intelligence relating to smuggling networks.

With a focus on efficiency and effective legal training, Australia can help simplify the migration process. This will benefit both people seeking asylum and states seeking to limit irregular movement and increase border security. Easier and financially inclusive migration routes would discourage people smugglers, as well as encouraging ‘entrepreneurial individuals’ to use legal mechanisms.