What do we know about people seeking asylum and employment? 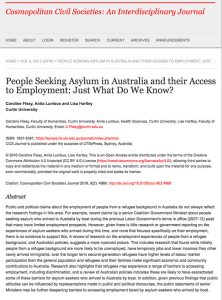 The article, by Caroline Fleay, Anita Lumbus and Lisa Hartley, looks at the employment statistics of people seeking asylum. The article contends that:

Commentary from politicians and media figures should instead emphasise the many positives of refugee employment, just as government policy can be improved to assist their involvement in the labour force. Recent events, particularly harsh funding cuts to Status Resolution Support Services (SRSS), will only serve to increase the destitution experienced by people seeking asylum.

What we do know

Studies show that some people seeking asylum in Australia come with ‘considerable skills and experiences’. This clearly contradicts Minister Peter Dutton’s statement that many refugees are ‘illiterate and innumerate’. Their skills cannot be used while they are denied working rights or sit in detention.

In contrast, good things happen when refugees are empowered to work and contribute to Australia. A 2011 study by Graeme Hugo refugees in regional areas can address labour shortages and can contribute to significant regional growth. Their job prospects improve in the long term, with ‘second-generation refugees (having) higher levels of labour market participation than the general population’. This is largely because people from a refugee background are strongly motivated to work and become economically independent.

What stops them from getting work

People from a refugee background may initially struggle to get into work, but there are complex underlying factors why this is. Some government policies make it more difficult for people seeking asylum to get work, especially for those who came by boat.

Under both Labor and Coalition governments, they have been detained or released into the community with very little, including being prevented from working. Government policy has made it more difficult for people seeking asylum to work, and has contributed to their forced destitution.

People seeking asylum face systemic barriers to participation in the formal labour market, even accounting for their education and English skills. These barriers: include

A focused effort should be made to both acknowledge and remove these barriers. As well, it is clear that denying work rights to people seeking asylum while giving them inadequate support harms their mental health. Getting work instead improves their mental health and should be encouraged by government policy.

The authors highlight the negative effect of misleading statements by senior politicians, including Ministers Dutton and Morrison, about the employment of people seeking asylum. Research demonstrates the damage done by such comments.

Misinformation will only disenfranchise those from a refugee background, and negatively affect the community’s attitudes towards people seeking asylum. Ministerial statements can also be hypocritical, given the negative impact of government policy.