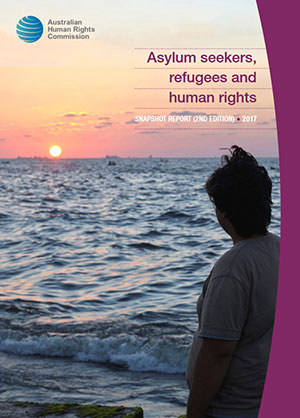 The Australian Human Rights Commission (AHRC) has released a second edition of its snapshot report, Asylum seekers, refugees and human rights. The report provides a very useful review of recent developments in refugee and asylum policy in Australia.

The snapshot reports that:

The report addresses four key areas of law and policy:

The United Nations High Commissioner for Refugees has highlighted potential breaches of Australia’s international obligations in a number of reports, submissions and statements. For more information look to our page on offshore processing.

The Commission has concerns that since the law has not been changed, the work done to get children out of detention could be reversed. It continues to express serious concerns for unaccompanied children and argues for greater protection for vulnerable children, especially when it comes to guardianship.

The Commission, in its visits to detention centres, have found that they are not an appropriate place to hold people, especially for long periods of time. The Commissions suggest there needs to be the introduction of minimum standards of detention facilities under Australian law. This would ensure access to solutions if breaches happen.

In the 2013 snapshot report, there were 57 people (including five children) facing indefinite detention due to security assessments. On 29 August 2016 there were four but these people have been in detention between four and six-and-a-half years

There is the option for an appeal to the Administrative Appeals Tribunal (AAT). But if the minister has made the decision themselves the person cannot appeal.

The number of people in detention who have had their visas refused or cancelled has risen significantly since the last report. In October 2013, there were 115 people and in December 2016 there were 591 people.

Statistics on people in detention

Impacts of detention on mental health

Between 1 January 2013 and 25 August 2016 there were 1,730 recorded incidents of self-harm in detention. Detention can impair people’s cognitive function, memory and concentration, and this gets worse as time goes on.

Detention has terrible impacts on the mental health of children:

The Commission points out that recent policy and legislative changes mean that Australia is at greater risk of breaching its international obligations of non-refoulement.

People who arrive by boat have had limited access to refugee status determination procedures, due to changes since 2013.

The Commission is concerned that these people have a higher risk of being returned to danger.

The main developments have been:

Offshore processing is where people are sent to a third country to have their claims processed. While this is not prohibited by international law, human rights do need to be upheld.
The Commission observes that:

Two separate Senate inquiries have highlighted the shortcomings in the conditions in these detention centres:

The Commission has asked for more information about these issues but the Department has not yet provided this.
The Commission suggests that there is a need for an independent monitoring body to ensure transparency, accountability and compliance with human rights obligations.

Until when: The forgotten men of Manus Island

Discrimination based on mode of arrival

The Commission has conducted numerous studies on the experiences of those holding temporary protection visas who have uncertainty towards their futures. People holding these visas find themselves unable to make future plans and experience enormous stress because of the need to reapply for visas. This compounds their trauma from persecution. Not surprisingly, the Commission has found they have poorer settlement outcomes.

Read our report on the separation of refugee families.