The Refugee Council of Australia advocates on issues relating to refugee protection at both a national and international level. Issues identified in our annual community consultations often relate to concerns that refugee and humanitarian entrants in Australia have about people they are connected to living in precarious situations in other parts of the world.

The knowledge, connections and experiences of refugee diasporas in Australia can make them effective advocates at an international level, providing a voice for refugees that may not be otherwise be able to access decision-makers.

RCOA is committed to strengthening the link between refugee advocates and international decision-makers, such as the UNHCR, Human Rights Council, IOM and government missions to the UN in Geneva. Since 2007, RCOA has been providing support through the annual John Gibson Refugee Community Leadership Grant and other means for advocates from refugee backgrounds to participate in international dialogue on refugee protection.

What is the grant?

Established in 2012, the annual John Gibson Refugee Community Leadership Grant supports advocates from refugee backgrounds to take part in high-level international advocacy on refugee issues. One advocate is selected each year to join the Australian NGO team at the annual consultations between the United Nations High Commissioner for Refugees (UNHCR) and NGOs in Geneva, Switzerland. The consultations bring together NGOs from around the world and provide a forum to network, gather and share information, hear about new policies and best practice, discuss protection gaps and identify joint solutions. Participation in these meetings also provides opportunities for high-level advocacy through side meetings with UNHCR personnel, government representatives and other key players.

Who was John Gibson?

John Gibson AM (1950-2012) was one of the Australian refugee sector’s best-loved and most admired advocates, working tirelessly to promote the rights of refugees and people seeking asylum for over 25 years. He was respected both in Australia and internationally for his knowledge of refugee law, his advocacy for refugees and people seeking asylum and his leadership of Australia’s refugee sector.

John served as RCOA’s President between January 2006 and August 2012, was the founding chairperson of the Victorian Foundation for Survivors of Torture (also known as Foundation House) and served as a Member (part-time) of the Refugee Review Tribunal for four years. A member of the Victorian Bar, he operated a specialist practice in refugee and migration law, served as junior counsel in a number of significant High Court cases on refugee issues, and provided information, advice and training on a variety of refugee-related issues both in Australia and overseas. In 2013, he was made a Member of the Order of Australia “for significant service to international relations as an advocate for human rights”.

RCOA has supported the following advocates to participate in international advocacy, either through the John Gibson Refugee Community Leadership Grant or through enabling their participation in other ways.

Bernice came to Australia in 2014 from Burundi. She has a strong passion for advocacy for street children and refugees, particularly those in the Great Lakes region of Africa. She has dedicated many years to research in this field, which has allowed her to build more effective solutions through a range of avenues, including her work with the Red Cross and the Association for Peace and Human Rights. In Australia, she continues to contribute to her passions, and she has worked with the Burundian community in Sydney, the Campbelltown Uniting Church and the Asylum Seekers Centre. She hopes that the opportunity to attend UNHCR meetings in Geneva will be a stepping stone in improving the situation of all refugees, but particularly the women and children living in camps in her homeland. 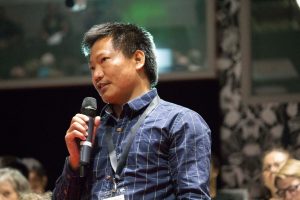 Simon is a member of the Chin community in Melbourne. Before coming to Australia, he was an active leader of his community in Malaysia. His practical experiences with Chin refugee communities and human rights organisations and the International Rescue Committee in Kuala Lumpur give him an excellent understanding of International Human Rights and Refugee Law. In Australia, Simon continues to be a voice for his community, and has been a volunteer with the Australian Chin Relief Committee since 2015. At the meeting of the UNHCR in Geneva, Simon wishes to bring the plight of refugees living in India and Malaysia and the issues facing Rohingya refugees to the world’s attention.