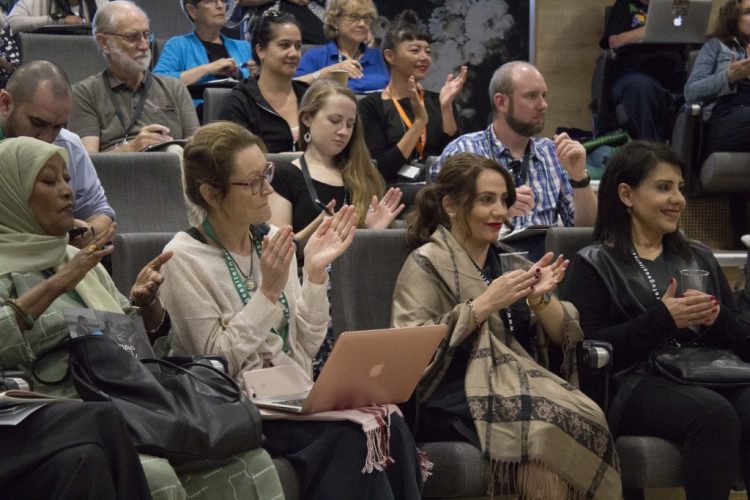 You can read the report by the Refugee Council of Australia and Melbourne Social Equity Institute on the outcomes of the second annual conference Refugee Alternatives: Improving policy, practice and public support, held on 13-14 February 2018. The two-day conference, hosted at the University of Melbourne, brought together a broad range of expertise from across the country and globally to cover topics of displacement, protection, cooperation, wellbeing, resilience, education, advocacy, and unity. The conference’s goal of seeking alternatives was expressed through 15 diverse sessions on a broad range of themes.

An overview of these themes and recommendations can be found in the full report below alongside a separate outcomes report that summarises the main outcomes of the conference.

Discussions at the conference brought up several themes that transcended individual sessions or sets of recommendations. These themes were repeated by different participants across diverse sessions and contexts. Some themes further developed ideas expressed at the 2017 conference, while others were emerging ideas from the year’s work. The conference outcomes are grounded in these themes.

The need for an intersectional approach

The conference opened and closed with calls for an intersectional approach to our work. Refugees and people seeking asylum are not a homogenous group: there are intersections between identities and needs based on migration status and needs as members of the LGBTI community; as older citizens; as people with disabilities; and as people from varying religions, backgrounds, and nations. Without recognition of these intersections, communities will continue to be misrecognised, silenced, and denied essential services and protections.

The harms of securitisation of migration

There was widespread recognition that the discourse around migration in general, and refugees and people seeking asylum in particular, has continued to harden. Many speakers discussed the ongoing shift in emphasis from multiculturalism and ethnic affairs to border control, home affairs, and security. Governments create suspicion and division for political expediency, exploiting security issues such as trafficking and terrorism to justify more punitive border security. Some elements of the media spread misinformation on refugees and people seeking asylum that portrays them as dangerous. There is a hardening of the public attitude towards some of the most vulnerable people in our community, trickling through to local communities as evidenced by racism and xenophobia.

The move from talk to action

Conference participants repeatedly emphasised the importance of doing as well as talking. The tone of the conference was imbued with the conviction that talk without action is meaningless, and that civil society organisations need to be trying innovative approaches to overcome this key hurdle. Key recommendations for civil society are below.

Legal rights as the first step

A number of speakers who either had lived experience of the asylum process or had worked as legal practitioners within the process reminded audiences that legal rights were the first step to continued protection. Many of the countries in Australia’s region are not signatories to the 1951 Refugee Convention and thus many of the refugees in our region are afforded no legal protection in their host countries, and Australia does little to alleviate the regional pressure. In fact, many speakers with experience of the regional asylum process asserted that Australia has a negative impact on the region. Australia itself has a drawn out and traumatic legal process for seeking asylum. Recent changes to eligibility laws make the process even more difficult.

The continued importance of self-representation

The need for refugee self-representation was one of the most prominent themes from last year’s conference and remained pertinent this year. In particular, there was an emphasis on the need to transcend ‘storytelling’. Many participants agreed that self-representation needs to go further and deeper than providing a platform for storytelling. People with lived experience of seeking refuge need to have space to advocate for policy, be a part of decision making practices, and have a seat at the table when it comes to issues that affect them.

Partnership and collaboration as a way forward

With so many people from various sectors coming together for the conference, it was no surprise that partnership and collaboration took a prominent role in the sessions. The popular Partnerships in Practice session took the format of short presentations from a number of different organisations and initiatives, each discussing how partnerships have helped them to achieve practical change. The need for combined and connected resources through partnerships and the greater efficacy of collective efforts make successful partnerships beneficial to every stakeholder involved: the people on the ground and the communities with lived experience, volunteers and staff, donors, and organisations.

A re-focus on local government

A popular session at the conference was one on local government. The audience was inspired by the robust and practical action taken by the speakers in leveraging their multi-directional partnerships at the local level to tackle indifference, address xenophobia, and markedly improve settlement outcomes in three very different resettlement destinations. The speakers demonstrated the interest local governments have in seeing good settlement outcomes, as the level of government closest to the people, and that focusing on local impacts rather than the national debate was key.

Statelessness as a distinct issue

Over the last year, and due in part to the overwhelming nature of the Rohingya refugee crisis, the issue of statelessness received more attention at this year’s conference. Our session on statelessness explored how statelessness is distinct from, but also overlaps with, refugee experiences. Australia’s treatment of stateless people was discussed, as was emerging civil society and academic networks that promote collaboration and information sharing on addressing statelessness in the Asia Pacific region.