The 2021 Refugee Alternatives Conference was co-hosted by Whitlam Institute within Western Sydney University from Tuesday 6 to Wednesday 7 July and the Refugee Welcome Zone Forum on Thursday 8 July. Due to changing restrictions, it was held entirely online.

The conference theme ‘Rebuilding: resilience and innovation' recognised and celebrated the incredible and challenging work that took place whilst navigating the unprecedented impact of the current global pandemic. Rebuilding through resilience and innovation means building back stronger, igniting new ways of thinking and transitioning towards an even more effective and inclusive way of working together.

Go to the Refugee Alternatives page 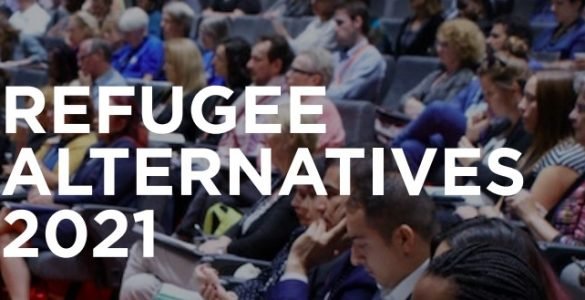 You can read the 2021 Refugee Alternatives Conference outcomes report here. 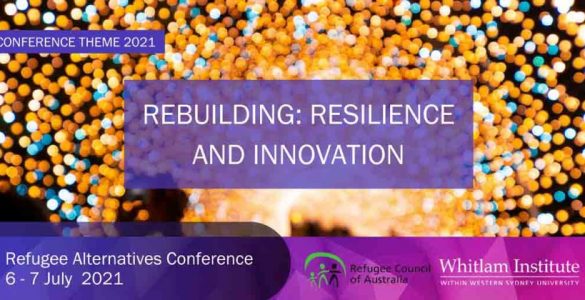 You can read the 2021 conference program here. 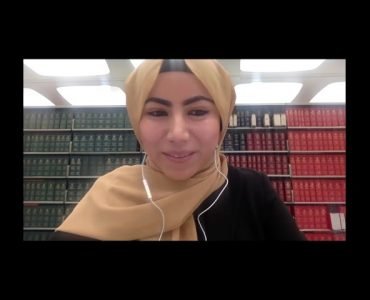 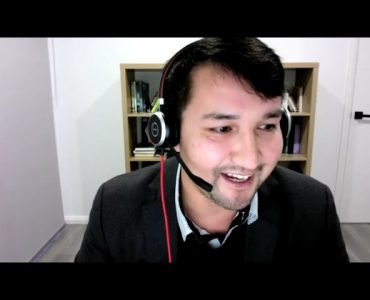 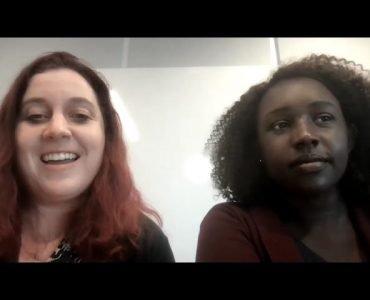 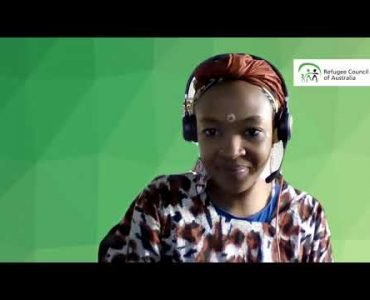 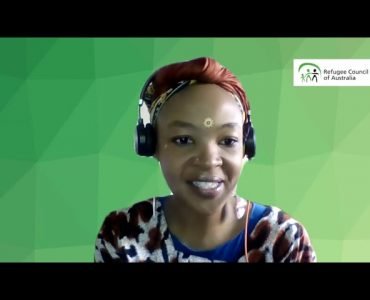 Adama Kamara, Deputy CEO, Refugee Council of Australia
Adama recently joined RCOA following a 10-year career in local government working on place-based community developed projects in western Sydney. Adama has personal and family experience of seeking asylum and supporting newly arrived refugees from her home country of Sierra Leone. She has a passion for community led initiatives and an advocate for meaningful participation. She has led co-design projects with young people, people seeking asylum, refugees, culturally and linguistically diverse communities and service providers. One example is the multi-award-winning Refugee Camp in My Neighbourhood project, which she initiated and has led since 2014.
+ 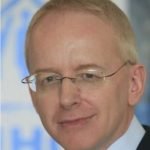 Adrian Edwards
Representative of the United Nations High Commissioner for Refugees. Adrian Edwards is the Representative of the United Nations High Commissioner for Refugees in Canberra with geographical responsibility for the region including Australia, the Cook Islands, the Republic of Fiji, the Federated States of Micronesia, the Republic of Kiribati, the Republic of the Marshall Islands, the Republic of Nauru, New Zealand, Niue, the Republic of Palau, the Independent State of Papua New Guinea, the Independent State of Samoa, the Solomon Islands, the Kingdom of Tonga, Tuvalu and the Republic Vanuatu. Building on a long history of UNHCR involvement in the region, Adrian’s role is to work with governments and other partners to increase understanding and support for refugees and asylum-seekers, and stateless persons. Before coming to Australia Adrian was UNHCR’s representative in Montenegro. He has also been an international spokesperson for the organization and led its worldwide news and media operations for over a decade including at the 2019 Global Refugee Forum and across multiple humanitarian emergencies. Over the course of his UN career, he has worked in Afghanistan with the UN political mission UNAMA, in Timor-Leste with UNMIT, in Sudan with the UN-AU Hybrid mission in Darfur, and in Cambodia where he was a political violence analyst for OHCHR. Adrian has a background in human rights policy and in journalism in the Asia-Pacific, having worked among others with the Far Eastern Economic Review, Reuters, Economist Intelligence Unit and in South Korea as a radio and TV correspondent for the BBC. Adrian is British-Swedish. He studied public administration at Harvard, and music in London. He is married to journalist Huongly Buiduon
+ 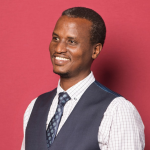 Alfred Mupenzi, Western Sydney University
Dr Alfred Mupenzi is a current staff member at Western Sydney University. In his professional work, Dr Mupenzi, leads a program: Refugee, New and Emerging Communities under Widening Participation Engagement Advancement. Originally from Rwanda, Alfred was born and raised in Uganda to refugee parents. He went to school in Uganda and finished his Bachelor of Arts with Education degree in 2003. Alfred finished his Masters of Arts in Public Administration and Management at Makerere University in Uganda in 2010. He completed his Doctor of Philosophy (PhD) at Western Sydney University in 2018. Dr Mupenzi’s interest areas of research are in refugee/ asylum seekers, higher education, social justice and diversity, migration and transnationalism.
+ 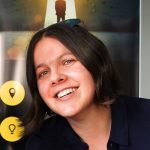 Anna Robson, Refugee Talent
Anna Robson is CEO & Co-Founder of Refugee & Migrant Talent (RMT) whose experience working on Nauru led her to meet her co-founder Nirary Dacho, a Syrian refugee with a tech background at a Techfugees hackathon in 2015 and start Refugee Talent. They have built RMT into a social enterprise providing recruitment & technology solutions.
+ 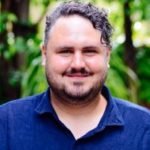 Asher Hirsch
Asher is a Senior Policy Officer with the Refugee Council of Australia, the national peak body for refugees and the organisations and individuals who support them. His work involves research, policy development and advocacy on national and international issues impacting refugee communities. Asher is also a PhD Candidate and Lecturer at Monash University in public law, human rights, and refugee law.
+ 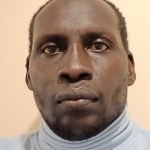 Atem-Atem
Atem Atem was born in South Sudan. Atem Grew up in refugee camps in Ethiopia and Kenya. Atem came to Australia in 2002 through Australia's humanitarian program. Atem attended the University of Canberra and the Australian National University (ANU). Atem is currently writing a PhD thesis exploring the settlement experiences of South Sudanese families in Western Sydney. Atem understands the importance of community organising. Atem established or took part in establishing several refugee community organisations. He is one of the founding members of the NSW Refugee Communities Advocacy Network (RCAN). Atem is currently the president of RCAN. Atem worked with the Multicultural Youth Affairs Network (MYAN) in both the ACT and NSW. He also worked with STARTTS. He currently works for Fairfield City Council in the role of Social Planning and Advocacy Officer.
+ 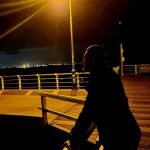 Azlan-Eshani
Forcibly Displaced People Network & National Refugee-led Advisory and Advocacy Group (NRAAG) Guided by the belief of “trying to leave this world a better place than you found it”, Azlan Ehsani brings years of experience in community work and advocacy as well as his lived experience as a queer refugee to the newly established Forcibly Displaced People Network in supporting and advocating for LGBTQIA+ forcibly displaced people in Australia. Azlan is also a community facilitator, racial justice educator and a recent playwright, whose work over the years has been to provide the space and platform to engage and address the intersectional issues affecting queer and trans people of colour, refugees and asylum seekers. Azlan is also a steering committee member of the National Refugee-led Advisory and Advocacy Group; the project lead of Queer Refuge, the first mental health support group for LGBTQIA+ refugees and asylum seekers in Victoria and is a part of the community social group, BridgeMeals, which organises free monthly dinners for LGBTQIA+ refugees, people seeking asylum and migrants in Melbourne. For safety concerns, this speaker consciously picked this type of picture for the program.
+

Deena Yako
Deena is a refugee advocate who utilises her personal experience of surviving and thriving as a refugee in her work as an educator, practitioner and inspiration. Having being directly involved in refugee resettlement for more than 14 years and been a co-founder of a number of thriving programs, supporting refugee young people and their families. Deena has also used her skills and experience in educating the Australian public about what it is to be a refugee. Deena is currently also coordinating the education program at the Refugee Council of Australia’s Face to Face Schools and Community Program. In the three years since then, Deena has broadened the focus of RCOA’s Face to Face program, taking it from schools to wider community and business audiences. She has also been a superb mentor to the growing number of people who have participated in the program as refugee speakers. Deena also sits on a number of management and advisory groups relating to refugee advocacy and resettlement and is an active member of her local community.