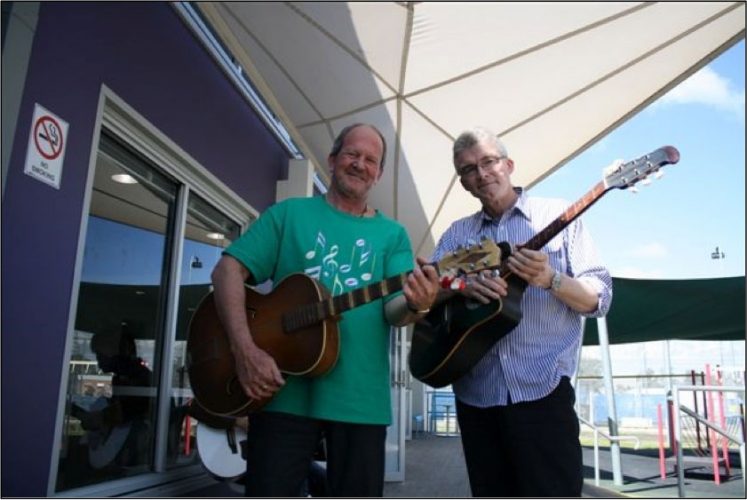 Music for Refugees – an initiative to source donated musical instruments and encourage music classes for people in immigration detention centres.

Music for Refugees sources donated musical instruments and volunteers to establish music classes for detainees in immigration detention centres across Australia. The initiative encourages musicians to start lessons and musical jam sessions in detention centres. Music for Refugees, which began in 2010, was started and is self-funded by volunteer music teacher, Philip Feinstein.

Music for Refugees looks to provide music classes for hundreds of refugees and people seeking asylum in closed detention centres around Australia.

Music for Refugees was established to provide stress relief for refugees and people seeking asylum living in closed detention centres.

“I realised that music, being a great stress reliever, could help. I therefore started music classes and jams at Villawood Detention Centre and initiated collection of music instruments for Villawood and later at other detention centres throughout the country,” says Philip Feinstein.

Music for Refugees has established drop-off points for musical instruments to be donated through the Uniting Churches and Emanuel Synagogue in regional and metropolitan locations across the country.

The initiative provides information and advice for musicians wishing to volunteer their time about how to establish a music class in detention centres, including providing contact details for Serco staff in the various centres across the country.
Promotion of the initiative has been through social and other media, with stories featured on ABC and SBS News.

The smiles on the faces of the detainees when a lesson or jam is about to start is testament to the success of this initiative.

Many detainees have started having their own jams without volunteer teachers being there.
Villawood Immigration Detention Centre now has more than one music room.

The initiative has succeeded in obtaining over 5 pianos, 30 guitars and other instruments for the benefit of detainees at Villawood Immigration Detention Centre.

The really hard challenge currently is getting the media interested, as without their assistance it becomes difficult to get publicity in remote areas. The problem is that the media generally only go for bad news stories and this is a good news story.

Just do it! While members of the public are generally averse to donating money, they are very good in donating goods. The fact that Music for Refugees has succeeded in obtaining so many musical instruments for Villawood is testament to the wonderful people of Sydney. The same is happening in other centres. So, for someone planning a similar initiative, don’t be afraid to ask the public for assistance. They generally want to give but just don’t know how.

Find out more about Music for Refugees

Print this
Art and culture Detention