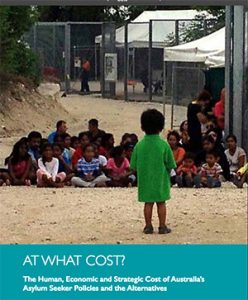 At what cost? The true cost of Australia’s refugee policies

What is the true cost of Australia’s refugee policies? UNICEF Australia and Save the Children recently released a report, ‘At What Cost?’, setting out the extraordinary human, monetary and reputational costs of our refugee policies.

The report details some of the harms suffered by children on Nauru, including:

The report estimates that, in the past four years, the Australian Government has spent $9.6bn on its asylum policies. Offshore processing alone is estimated to cost over $400,000 per person, per year.

The report also looks at the strategic costs for Australia, including:

The report made nine recommendations for the Australian Government to consider.

The report recommended that the following recommendations could be implemented within three years: