Destitute and vulnerable: the hardships of people seeking asylum 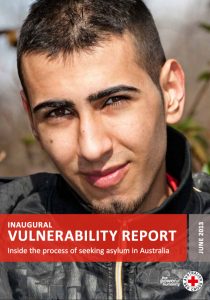 The policy leading to their destitution in 2013 was the ending of work rights and government-funded support after the second rejection of their visa application for those in community detention. As they still had a legal right to appeal, they continued to live in the Australian community. This left them acutely vulnerable for months or years. The loss of income and work could mean they could not eat, lost their housing, and could not get legal help. Their applications to appeal suffered as a result.

People seeking asylum also suffered mental hardship as they waited for decisions and received rejections, especially with the loss of income. Those who were working felt empowered and a sense of dignity in sending money home to provide for their family.

Working is important for overcoming housing and food insecurity, as well as the emotional stresses of applying for asylum. However, in 2013, many did not have work rights and only 15% of those with work rights had jobs. Of these, most were employed in menial, casual and poorly paid roles.

English skills were found to be the most important factor in gaining work, but this was difficult for those living in poverty. Those in community detention could not avoid destitution, making them highly vulnerable members of the Australian community.

The report recommended that the Australian Government provide work rights to those seeking asylum, as well as a basic living allowance and support payments that could meet their needs. This required immediate attention, as the numbers of people seeking asylum rose.