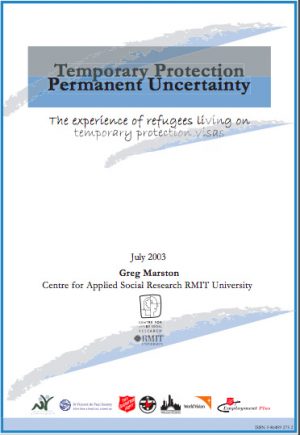 The findings are based on a study conducted by RMIT’s Centre for Applies Social Research (CASR). This involved interviews with 51 refugees in Melbourne and parts of rural Victoria, such as Shepparton and Mildura. Advocates, service providers, and health professionals were also interviewed.

The study interviewed people of diverse backgrounds, although most were from Afghanistan and Iraq. This reflected their proportion of the world’s refugee population at the time. The interviewees were also diverse in age, gender, and family status, and had been living in the Australian community for at least two years, so they could comment on settlement needs and hurdles.

The suffering that refugees face in detention is reasonably well known to society. However, those on temporary protection visas are often invisible.

Some Australian states, notably Queensland and Victoria, have conducted research on the impacts of TPVs. These found that the uncertainty and restrictions has significant effects on health and employment. As well, TPVs put enormous strain on community service providers, shift costs of refugee resettlement to State Governments, and create tension within ethnic communities. The aim of CASR’s study was to further understand the experience of refugees on TPVs and increase community awareness.

The other type of temporary visa was the Safe Haven visa, which was given to those fleeing the war in the former Yugoslavia. The temporary nature of the visa deliberately encouraged those visa holders to return home when the war had ended, despite fears that the region was still unsafe and a possible breach of non-refoulement obligations. It is the Safe Haven visa which Marston says established public acceptance of temporary protection.

The former Immigration Minister, Phillip Ruddock, justified TPVs by saying that “we honour our obligations, but if things change at home and you can go back, then you’ll be going back”. TPVs were further justified because of the “increasing misuse of onshore protection arrangements by organised people smugglers”.

The 1951 Refugee Convention does not include a right to permanent relocation. However, it does prohibit discriminating or penalising refugees because of how they arrived. Marston suggests that Australia has created two types of refugees based entirely on how they arrived. The interviewees also felt that they were being punished by the restrictions placed on them.

In all of the interviews, there was a recurring theme of uncertainty and powerlessness due to the temporary nature of their visa. Although the interviewees thought access to health care, employment and housing was important, the main feeling was that they had no control over their life.

Interviewees described their emotional transition from detention to the community as “high expectations, followed by confusion, sadness and shattered hopes”. One youth worker in Shepparton commented that “they don’t know whether they should commit to the town, connect to the society. Rural communities demand commitment […] why would people do that on a temporary protection visa?”.

Marston also notes the restriction on overseas travel while on a TPV, which prevents family reunions. People on TPVs have no option to sponsor family members for an Australia visa, and even if they are eventually granted permanent residency, it will take at least two years to reunite with family. This inability to be reunited with family causes emotional distress, and even poverty for those who send money overseas to support their family.

Resettled refugees face barriers include shortages of housing, discrimination, lack of choice, and unaddressed special needs. This study came to similar conclusions, with other barriers including poverty and overcrowding. Poor quality housing makes it harder to feel safe, undermining the recovery process for refugees. The high cost of private rentals and furnishings meant they could not afford to pay for other necessities, and the lack of information about the housing system meant people were unaware of their rights and could easily fall victim to discrimination.

In terms of income support, those on TPVs would only be eligible for Centrelink Special Benefit and limited family related payments. In comparison, permanent residents have access to Newstart, Youth Allowance, Austudy, Parenting Payments, and other benefits to match their living circumstances as well as full Job Network services.

Generally, Special Benefit has much stricter criteria than any form of Centrelink payment, which makes TPV holders particularly vulnerable to breaches. As well, refugees may be discouraged from appealing an unfair decision because of the lengthy and confusing process and the fear that it may jeopardise any chance at permanent protection.

The report includes examples of refugees being penalised for sending part of their limited earnings to family overseas. Some of those interviewed explained that they didn’t realise they needed to declare income that they weren’t using to meet their living costs in Australia. Others questioned the consistency of Centrelink processes, with one interviewee commenting that his teenage son was required to submit a Job Seeker form to Centrelink, but none of his friends did.

Entering the workforce is an important step in settling into a new society. Some of those interviewed were working part-time, temporarily or casually. Only four had found full-time work.

Their status as a temporary visa holder continued to present challenges even after finding some work. For example, three of the interviewees were working as security officers, but this required them to complete a training course and pass an entrance test. Refugees on TPVs are not eligible for Job Network benefits which would have covered the costs of the course and tests, so they had to pay for it themselves. Some in regional parts of Victoria had found work as fruit pickers, which is usually paid according to how many bins are filled. Fruit pickers are generally paid about $300 per week, which places them on the low end of the earnings scale.

Of the 22 young interviewees aged between 18 and 24, most were students or had recently finished school and were enrolled in TAFE or a Community Jobs Program. Many expressed their desire to get a tertiary education but felt unable to because of costs and eligibility.

Marston identifies three main barriers to labour market participation for refugees. The first is their temporary status, which puts them in a ‘high risk’ group because employers are unsure that the job applicant will stay for the long haul. One person spoke of how he attended group interviews in the manufacturing sector and was eventually rejected as a consequence of ‘company policy’ not to accept people on temporary visas.

While most job seekers are challenged by a lack of experience, refugees face extra challenges. Although adult refugees often have a wealth of experience, knowledge and skills, this is often discounted because it was not acquired in Australia. Some were qualified as electricians, mechanics, hairdressers, teachers, engineers, accountants, physiotherapists. One had previously worked as a senior public servant. Yet they were struggling to find work in Australia.

Determining accreditation or equivalent qualifications can be confusing and costly. The National Office of Overseas Skills Recognition, administered by the Commonwealth Department of Education, offered assessment services to overseas trained migrants and refugees. However, TPV holders were required to pay $300, compared to the $145 fee for citizens and permanent residents. These barriers have resulted in many refugees working jobs which they are overqualified for.

Poor health will obviously affect an individual’s social functioning and ability to reintegrate. Refugees face many stressful circumstances in Australia such as interviews, racial discrimination, delays in visa processing, or loneliness. This makes worse pre-existing anxiety, depression or post-traumatic stress disorder. This is especially evident among those on TPVs as they have more trouble finding work and adequate housing.

As well, service providers and health specialists who have worked closely with refugees have observed the effects of TPVs on their capacity to recover from past trauma. The Victorian Foundation for Survivors of Torture and Trauma, for example, attempt to re-establish a sense of hope by relying on the assumption that the client will gain permanent protection. This isn’t workable for a client who is on a temporary visa. All tof those interviewed drew a link between their temporary status and increased levels of anxiety and feelings of hopelessness that they may be forced to leave Australia.

Perhaps the most prominent need of refugees and people seeking asylum living in the community is adequate access to affordable medical services and medications. Those interviewed were asked about their knowledge of the health system and whether they’d experienced any difficulties in accessing it. While two of them had lost confidence in the health system after experiencing overt discrimination, most had positive interactions with health professionals.

Collectively, they spoke of difficulties in accessing health services due to long wait times, and the high costs of dental care, specialist care and emergency services in public hospitals. This is particularly apparent in rural areas where there is a decline in bulk-billing GPs. Many also expressed confusion about the health system, particularly the difference between public and private entitlements, which is made worse in rural areas by a lack of interpreters.

The most effective response in addressing the issues identified in the study would be for the Australian Government to immediately abandon TPVs. If the policy is not changed, a number of options could be explored, ranging from developing policy to supporting big and small service providers who rely heavily on goodwill. Inadequate funding is an ongoing issue for many parts of the community services sector, and many non-government agencies offer services that are not included in their organisational objectives and funding guidelines.

If the temporary protection visa regime is not abolished in the immediate future then there is a need to develop uniform standards of treatment for refugees on TPVs. This should take into consideration both the economic, social, and cultural guarantees of the 1951 Refugee Convention and general provisions of human rights law. Marston commends the Queensland Government’s response to the settlement needs of TPV holders, and the Victorian government which on many occasions offered one-off grants to support the resettlement needs of refugees on TPVs. However, there has been no coordinated approach.

Based on the experiences of those interviewed, some general practices were identified as having been helpful. Access to a community advocate and informal networks of family and friends is critical in the first few months after leaving detention, and offers invaluable knowledge and material support. Education campaigns targeted at employers may help in decreasing discrimination and raising awareness about the difference between the TPV and other forms of temporary visas. Medical doctors with refugee or culturally diverse backgrounds will play an important part in making health services more accessible.

Research shows that the longer refugees are forced to live in limbo, the heavier the toll becomes. There is no moral or legal justification for continuing with the TPV regime. Ultimately, it is a poor reflection of how Australia treats people seeking asylum. 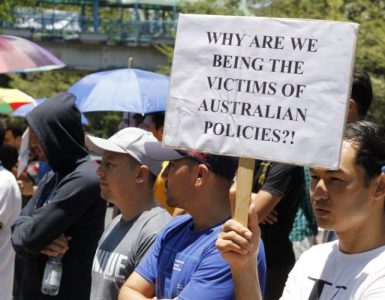 Guest post by Sitarah Mohammadi and Sajjad Askary Outline issues of refugees in Indonesia There are approximately 13,700 refugees currently stranded in Indonesia, unable to access any form of durable solution. More than...