An unnecessary penalty: Economic impacts of changes to the Status Resolution Support Services

The SRSS program is the only Government-funded support available for people seeking asylum. They are not eligible for any other form of social security payments, cannot access public housing and cannot apply for Low Income Healthcare Cards.

Given the limited service eligibility for this cohort, the community sector in Australia has responded with significant investments to support people seeking asylum. 22 of our 24 survey respondents (who were all non-SRSS providers), provided us with estimates of their current budgets to support people seeking asylum. The annual costs (operational plus salary expenditure) for services to people seeking asylum totalled approximately $31 million (of which $16 million is staff salary). The monetary value of volunteer support and donated goods was estimated to be an additional $7.8 million. In total, the 22 organisations in our study (as two did not provide their budget) represented nearly $39 million of service value to people seeking asylum across six states and territories and estimated their combined client caseloads at 19,100 people.

As noted, we asked survey respondents to indicate what proportion of their clients seeking asylum were also accessing services from other providers. The main services being accessed by people seeking asylum outside of our 24 survey respondents were legal (76%), general medical (76%), emergency relief (72%), social support (72%), and mental health services (70%) (see Figure 5 below). (Note that the sum of percentages do not equal 100%, this is due to people seeking asylum accessing multiple services simultaneously.) 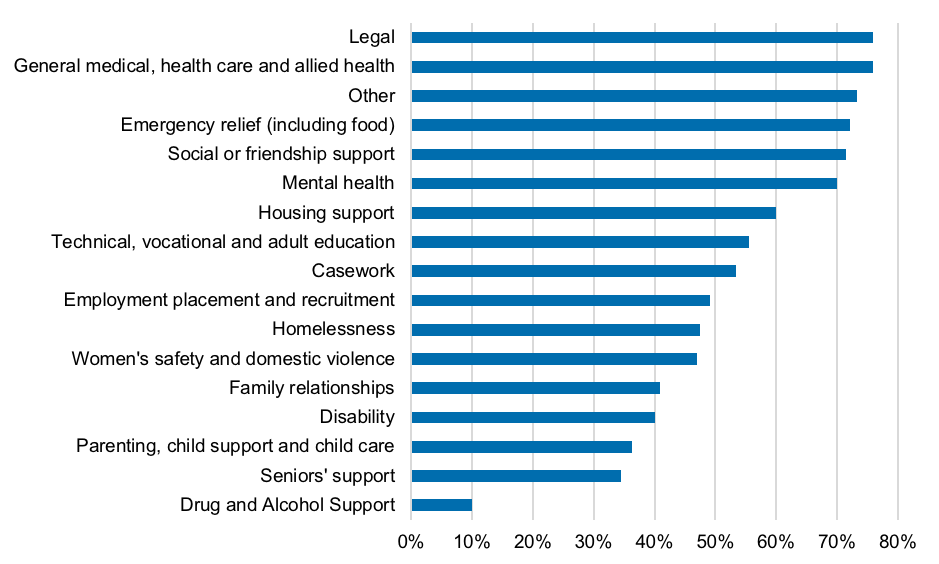 Research in the UK conducted by the Joseph Rowntree Foundation shows that without government benefits, migrants can quickly become destitute (defined as lacking the income necessary to purchase essentials like shelter, food, heating, clothing etc.), and rely on charities, churches, food banks, and local welfare funds. Surveys of humanitarian migrants in Australia conducted by the Salvation Army have also shown that humanitarian migrants frequently ask for help from welfare and community organisations, cut down on basic necessities, seek financial help from friends and family, delay paying bills on time and go without meals to survive. Removing income support for people seeking asylum, who are eligible for far less support than humanitarian migrants, will create even greater demand for the services of community organisations as people struggle to meet their basic needs and costs of living. There are also likely to be flow-on effects for legal, social, and child and family services.