The costs of offshore processing are difficult to fully understand. Different figures have been provided in different Senate estimates and have not been updated to include the latest statistics.

What is clear, however, is that is extraordinarily expensive, regularly costing more than $1 billion a year.

The below graph shows the figures published by the Department in its annual Portfolio Budget Estimates from 2013-2014 Financial Year to the current one. These totals amount to $9.65 billion since July 2013.

However, this is likely to be an underestimate because it counts only costs that are directly attributed to the offshore processing policy. For example, this would not include any foreign aid that was used as part of any resettlement deal (for example, the $40 million Cambodia received as part of its deal to resettle, in the end, a mere seven refugees).

The Australian Government has also provided the total costs paid under the agreements with PNG and Nauru for offshore processing since 2012, by financial year.

Read 'At What Cost'?, an analysis of the costs of offshore processing in 2016

Over $2.5 billion has gone to Broadspectrum alone, a contractor that previously supplied services on both Manus and Nauru. The costs of the latest PNG contractor, Paladin Holdings, are now over $445 million, despite the allegations of poor business practices.

This graph shows the top contractors and the value of their offshore processing contracts, according to their published value on AusTender (note: Canstruct is listed as both Canstruct International and Canstruct Pty Ltd).

This graph shows the main categories of the costs in offshore processing.

Get the data for contracts related to offshore processing

This is also in contrast to Australia's declining contribution to UNHCR (in 2021, just $22.7 million), as illustrated below. 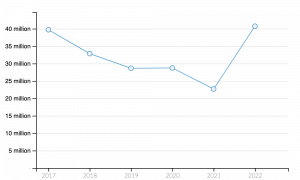 Of course, many of the people who came just before those in offshore processing are now working lawfully in the community and paying taxes.

There have been extraordinary costs, such as the $87 million in visa fees paid to the Nauruan government (as at 30 September 2018) - because we pay Nauru a visa fee of $2,000 a month for each refugee and $1,000 a month for each person seeking asylum, and another $1,050 annually for each service provider.

We have also paid nearly half a million dollars a month for 'staff bedsit accommodation' in a hotel ($429,660 per month) with a total contract of $19.26 million for the leasing of that hotel. We have spent $38.5 million upgrading Nauru's hospital, and $23.1 million building Bomana immigration detention centre in PNG.

The list of contracts for our offshore processing regime is extensive. More than $5 million has been paid to one company providing air services to Nauru, and nearly $20 million to another company leasing accommodation in PNG.

Yet the amount seen by refugees and people seeking asylum themselves is tiny. For example, single adults in Nauru Regional Processing Centre received $110 per fortnight in income support (in 2017).

Get the data and sources for offshore processing costs.