What are the options for people to get out of Nauru? The reality is that their options are limited.

The best hope for those who have been recognised as refugees is the offer from the US to resettle some, but not all, of them. That much-delayed hope is becoming elusive for many, clouded by concerns over Donald Trump’s restrictive immigration policies, including extreme vetting for key nationalities and a drastic cutting of the refugee resettlement numbers.

They could go to the only other country that Australia has a resettlement deal with, Cambodia, but that deal has so far been a complete failure.

New Zealand has also offered to resettle 150 refugees, but this has been rejected by Australia and Nauru. They have tried, but failed, to apply to other countries. If they are in extreme need, they may be transferred to Australia, but as already discussed this pathway has virtually closed off. Or, as the Australian Government hopes, they can go home to danger.

See our Operation Sovereign Borders and offshore processing statistics On 13 November 2016, the Australian Government announced it had reached a deal with the American government to resettle people to the US. Priority was to be given to the vulnerable, “namely women, children and families”, but the resettlement process was to be “gradual” and subject to standard resettlement admissions for the US.

While the deal was welcomed by many as at least offering a ray of hope for those languishing on the islands, many of its details remained unclear, and it has not proven to be either a quick or comprehensive solution to the suffering of those on Nauru or Manus Island.

First, the deal was thrown into doubt after the election of President Donald Trump, especially when the then Prime Minister Malcolm Turnbull was leaked saying to the new President that there was no commitment to resettle anyone under the deal, only to examine their resettlement cases.The government has indicated that there is an ‘indicative target’ of 1,250 people from both Nauru and PNG who could be resettled under the deal, which given there are over 1,600 people still in both places leaves open the question of what might happen to everyone else.

As well, the future prospects of those wishing to be resettled to the US have become even murkier because of Trump’s hardline immigration policy. This has included a travel ban against certain Muslim-majority countries (especially Iran and Somalia) as well as a ban on refugee resettlement and then and more stringent screening of ‘high-risk’ countries including many nationalities represented on Nauru. There are also significant fears that anti-terrorism legislation may prejudice the resettlement of those from Sri Lanka, as the breadth of that legislation was likely to capture many in the Tamil community. As at 21 May 2018, there were 112 people from Sri Lanka on Nauru, of which so far at least 28 have been accepted but four have been rejected. 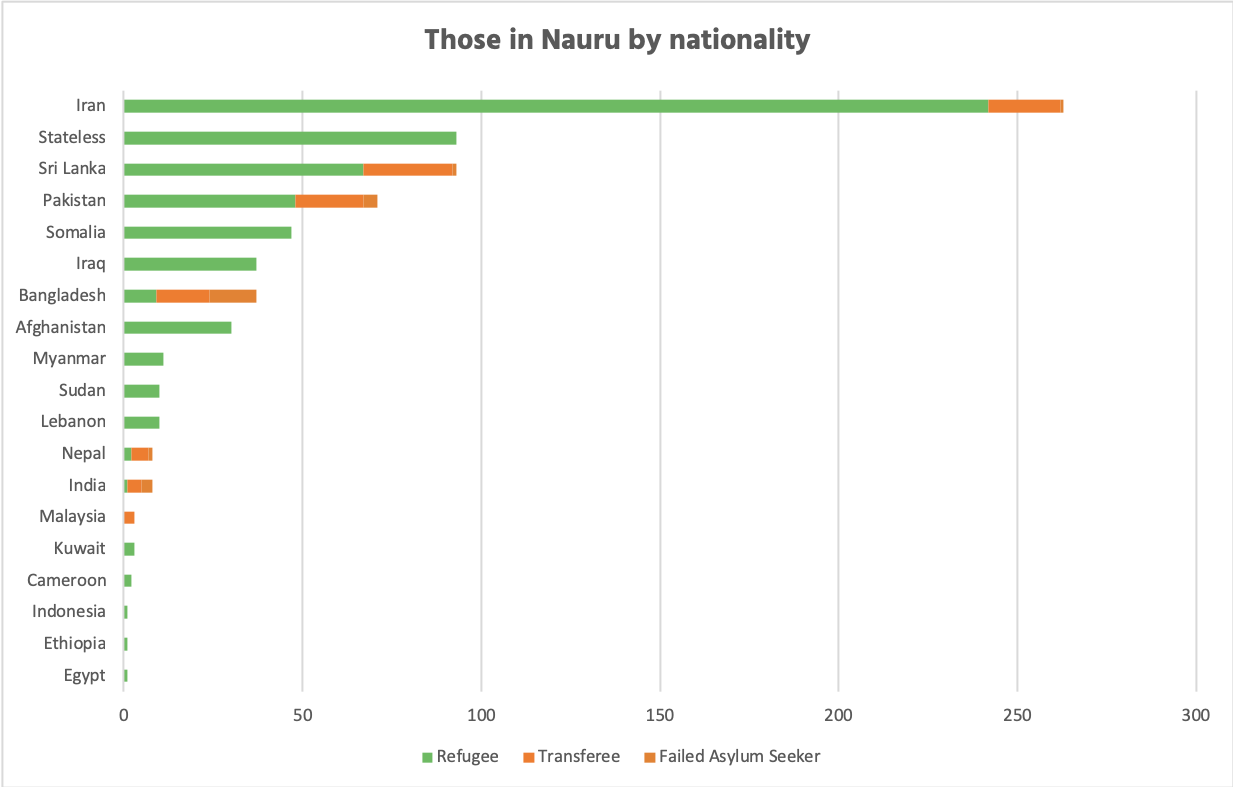 As at 21 May 2018.[/caption] Very significantly, Trump has drastically cut the refugee resettlement quota from 110,000 to 45,000 (with projections it could fall to just over 20,000 in the coming financial year, roughly the same as Australia has resettled in the previous financial year).  While the precise effect of these policies on the US resettlement deal remain unclear, their singling out of particular nationalities is especially significant since most of those left in Nauru and PNG are from Iran (329 in Nauru as of 21 May 2018), and there are significant numbers of people from Somalia (61 in Nauru as of 21 May 2018). Nearly half (47%) of the people on Nauru on 21 May 2018 were from countries subject to ‘extreme vetting’.

These factors have led to prolonged delays in resettling people from the US. The first group left from Manus Island on 26 September 2017, nearly 11 months after the deal was first announced. By 20 August 2018, only 371 people had been resettled to the US. Another 121 on Nauru have already been rejected.

The rejections appeared to evidence concerns that, while not technically excluded from the US resettlement deal, those from the countries subject to the travel ban would find it very difficult to be resettled, as 80% of those refused resettlement were from those countries. Most concerning was that around 58% of those rejected (70 people) were from Iran, compared to 15 Iranians who had been accepted (or nearly 80% of cases involving Iranians have been refused). 35% of the people on Nauru (and 36% of those on PNG) at the time were from Iran. This has caused intense despair among the community. In May 2018, one Iranian woman was reported to have attempted suicide on Nauru after being rejected by the US.

This high volume of rejections for Iranian people is a significant contributing factor in the mental health crisis in children on Nauru. Many children were so excited and hopeful about resettlement to the United States that they had packed their bags, and begun writing in diaries and drawing pictures about how their life would be. The rejections have been catastrophic, and have resulted in many losing hope completely.

There are two other groups in particular whose fate under the US resettlement deal remains unclear. First, UNHCR had participated in the deal on the agreement that a way would be found to reunite a small number of people with close family in Australia, but the Australian Government reneged on this. Such people have to make the tragic choice between resettling in the US and never seeing their families again, or remaining indefinitely in Nauru hoping for a change in situation.

While the government has indicated that applying from Australia might be possible in exceptional cases, we are not aware of any cases in which that discretion has been exercised. The Australian Labor Party has stated that people in Australia for medical treatment should be able to apply to resettle to the US from Australia.

Arash Shirmohamadi, an Iranian refugee, is on Nauru. His wife came to Australia when she was pregnant, and their daughter was born in Sydney in March 2017. He has never held or even seen his daughter. He has been told that, if he wants to apply for US resettlement, he must give up his daughter.

I feel like I am being held hostage, and for no reason, this is all just a nonsense. I see my baby on my phone, and I miss her every day. I need to hold my baby, I need to hug her. They have kept us apart for no reason, only to be cruel.

Another group is those transferred from Nauru or Manus Island to Australia for medical treatment (or following their family here). Some of these people have suffered sexual or other serious abuse in Nauru. Yet, if they wish to be resettled in the US, they are being told that they need to go back to the site of their trauma to be interviewed, and must give up any precarious life they have built in Australia for the uncertain prospect of being resettled in the US. There continues to be no resolution for this problem.

Seven people have left to go to Cambodia, under a failed ‘resettlement’ agreement which has cost Australia nearly $50 million.

Only one of them is reported to still be there. He has now threatened to go on hunger strike because the Australian Government broke its promise that it would reunite him with his wife and children who are originally from Syria. Despite this, there have been recent reports that the Government may be negotiating a new deal with the Cambodian Government.

Since 2013, New Zealand has offered to resettle 150 people seeking asylum from Nauru and Manus Island (preferably families), and the offer has been renewed since the election of a new government in 2017. New Zealand Red Cross has indicated it has the capacity to support significantly more than the 1,000 people New Zealand resettles each year and as part of its refugee resettlement quota.

Despite having repeatedly rejected the offer in public, it was revealed in April 2018 that the government had asked New Zealand to keep the offer open as a backup plan.  In November 2017, shortly after the new New Zealand government renewed its offer, it announced it would give NZ$3 million to support those on Manus Island and Nauru, while the Australian Senate passed a motion calling on the government to accept the offer.

On 21 August 2018, the New Zealand government revealed it had already directly approached Nauru with its offer, bypassing Australia, but had been turned down by Nauru. The Australian Labor Party has asked the Government to accept New Zealand’s offer.  In 2001, New Zealand took 130 of the refugees under Australia’s first ‘offshore processing’ regime, including 20 young children.

At least 165 people have gone back to their country of origin. The government claims they have done so ‘voluntarily’, but they have been induced to do so by the intolerable conditions and significant financial incentives. There is no monitoring of these people, so we do not know what has happened to most of them.

Several refugees have unsuccessfully tried to leave Nauru once they are recognised as a refugee with their identity documents, including to Canada, Fiji and New Zealand. Only one family appears to have successfully left Nauru for Canada.

Around 460 people are in Australia from Nauru or Manus Island for medical treatment or other protection reasons, or accompanying a family member. Around 430 are from Nauru. As of 21 May 2018, 293 were in community detention and the rest in other forms of detention. Worryingly, there were 149 people transferred from Nauru or Manus Island who were now living in the community without any access to income or casework support, nor access to subsidised medication.

As discussed above, in 2018 there have been many reports of more people, especially children, who have been transferred to Australia despite the resistance of government officials.

Those transferred were typically held in community detention, in a specified residence subject to curfews, and provided a basic living allowance and other critical supports including health care, case management and access to torture and trauma counselling.

However, in late 2017, without notice, the Government decided to remove that support from 62 people, and did the same again in 2018. As a result, these people have been put at grave risk of destitution. Although the Government has given them visas that allow them to work, it is unrealistic to expect that people who have been in prolonged detention in Nauru or Manus Island and have been transferred for complex medical needs are in any position to find work in an unfamiliar country, in an unfamiliar language.