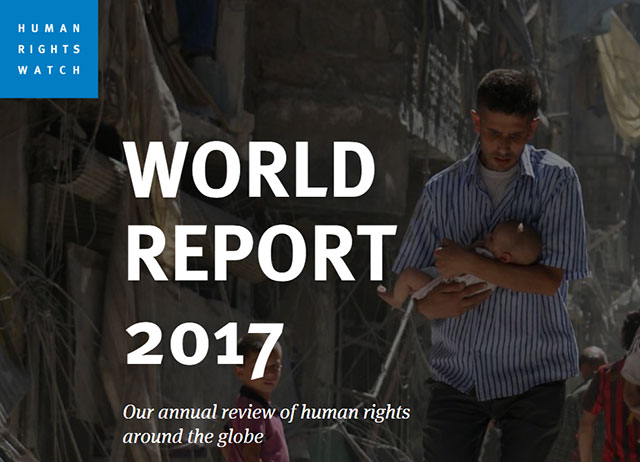 The 27th annual Global Report highlights the violence, depression and hopelessness experienced by refugees and people seeking asylum on Manus Island and Nauru.

The report also addresses serious issues in areas such as Indigenous, disability and children’s rights, inviting comparisons between Australia’s treatment of children in immigration detention and the controversial footage aired by the ABC in July 2016 which showed the abuse of children at a juvenile detention facility in the Northern Territory.

Human Rights Watch has condemned Australian government policies relating to offshore processing and prolonged detention, criticising legislation introduced last year that prevents those arriving by boat from ever settling in Australia.
As explained in the report, Australia’s policy since June 2013 has been to send those arriving by boat to Manus Island or Nauru, with 900 people currently detained on Manus Island and 1,200 on Nauru.

In April 2016 the PNG Supreme Court ruled this practice to be unconstitutional. Although the highest court in Australia has ruled that the operation of the centres is lawful under Australia’s Constitution, both governments have since agreed to close the Manus Island centre. However, the 2017 HRW report emphasises there is still no established timeframe within which to do so.

The report highlights the failure of the detention centres to provide any viable or sustainable solution to the arrival of people seeking asylum or refugees. Specifically, the report addressed instances of denied or delayed urgent medical care, very low resettlement rates in mainland PNG, Manus or Cambodia, and the abuse of those perceived to be lesbian, gay, bisexual, transgender or intersex (LGBTI).

Rates of self-harm, suicide attempts and serious mental health issues are unacceptably high within immigration detention. The report refers to the two refugees who burnt themselves in separate incidents in May 2016 as tragic evidence of Australia’s failure to protect the wellbeing of those in detention.

The report also criticises the ‘solution’ presented by the Australian navy turning boats back towards Vietnamese and Sri Lankan waters last year. Given that both countries have poor human rights records in this area, those turned back are unlikely to return to safety.

Australia as a global actor

The report warns that the current model is harmful not only for the mental health and physical wellbeing of those detained, but for Australia’s reputation as a multicultural and democratic global actor.

In the report, Human Rights Watch also notes the criticism levelled at Australia by various UN agencies, including the UN Committee on the Rights of the Child, the UN High Commissioner for Human Rights and the UN High Commissioner for Refugees.  The UN Special Rapporteur on the Human Rights of Migrants, Francis Crépeau, is quoted saying that Australia’s migration policies are in “contravention of its international human rights and humanitarian obligations” following his visit to Australia and Nauru in November 2016.


For Human Rights Watch, these criticisms are representative of a broader movement that calls for the end of abusive practices in Australian offshore detention and ultimately for the fair resettlement of genuine refugees – a shift in policy that, if successful, would secure Australia’s role as a vibrant democracy with a strong human, political and civil rights record.