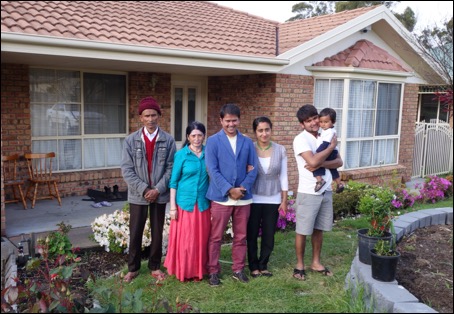 FacebookTwitterRedditPinterestEmail
Home > Speeches > A right to home: Creating pathways out of homelessness for non-resident people
Speeches

9 min read
Presentation by Refugee Council of Australia CEO, Paul Power, to the forum at Customs House, Sydney on 19 July 2022

I would like to thank Uncle Michael West for the welcome to country today and acknowledge the Gadigal people of the Eora nation as the custodians of the land on which I stand, paying my respects to elders past, present and emerging.

I’d like to express my thanks to the organisers of today’s forum – the City of Sydney, St Vincent’s Health Australia, the End Street Sleeping Collaboration, Jesuit Refugee Service and Homelessness NSW. This event casts much-needed attention on the situation of people whose homelessness is a direct result of their exclusion from assistance available to others living in Australia.

It is an opportunity for all of us to listen and to understand more about the reality of homelessness in Sydney from the perspective of people who have direct lived experience of homelessness and those who work directly with them.

The Refugee Council of Australia’s role, as the national umbrella body for organisations supporting refugees and people seeking asylum, is to learn from those with direct experience, to analyse what options there are for policy change and to work with others on trying to lobby for that change.

Today’s forum had its genesis in the early months of the COVID pandemic, when the additional assistance offered by the Federal Government to Australian citizens and permanent residents drew greater attention to the economic vulnerability of temporary visa holders. Organisations such as Jesuit Refugee Service, the Asylum Seekers Centre, the House of Welcome and Red Cross have known about the economic vulnerability of people on bridging visas for many years, having worked for 20 to 30 years or more on assisting people at risk of destitution.

Within the first 10 days of the COVID lockdown in March 2020, it became obvious that people on temporary visas, including asylum seekers on bridging visas, were among those being hit hardest by the loss of casual and part-time jobs. This was exacerbated by the Federal Government’s decision to exclude them from Jobseeker payments and the special Jobseeker supplement announced in the third week of March.

We drew together frontline asylum seeker services and heard that they were all being overwhelmed with requests for emergency assistance beyond anything they had experienced before. We then wrote to every Federal Parliamentarian twice within a week to share these concerns, pleading for the safety net to extend to all based on need not on visa status.

We then launched the Nobody Left Behind campaign, gaining the support of 230 organisations including medical groups, peak bodies, unions and NGOs, as well as many more educators, mayors, individuals, and people personally affected. We worked closely with about a dozen member organisations, engaging directly with key Federal ministers and MPs but we also ensured that state governments and local government were hearing about what was happening in their communities as a result of the Federal decision to do nothing.

A survey we conducted of emergency relief organisations in August 2020 revealed that the supplementary payment to people receiving Jobseeker resulted in a dramatic drop in requests for assistance from Australian citizens and permanent residents. But the exclusion of temporary visa holders resulted in a massive increase in requests for assistance from them.

From our assessment, people seeking asylum were four times more likely to be seeking emergency relief than other temporary visa holders. We heard that people on short term bridging visas were forced into more casual and precarious forms of work – and typically were among the first to lose their income during an economic downturn.

At that time, charities assisting asylum seekers reported that 75% of people seeking help were having difficulty paying electricity bills, 70% reported skipping meals in order to survive, 56% were at risk of homelessness and 14% were already homeless.

Governments choosing who has a safety net and who has none

What is clear is that the Federal Government actively chose who to assist and who to ignore during the pandemic – and, in effect, chose which groups of people in Australian society were more likely to become homeless and which were not.

After all of the collective lobbying, some Federal emergency assistance was extended through charities including the Red Cross, but it was never sufficient to support people with no income of their own.

The phenomenon of governments choosing who has access to a safety net and who doesn’t is not new. The Howard Government made an active choice in 2001 to exclude New Zealand citizens without permanent residency from Australia’s national safety net, despite the fact that the New Zealand Government maintained support for Australian citizens living in New Zealand in the same circumstances. The end result of this decision back in 2001 has been that New Zealanders without permanent residency are now over-represented among those homeless in communities across Australia.

The same active choice was made in 2017 by Peter Dutton during his time as Home Affairs Minister, through his decision to cut the safety net for asylum seekers on bridging visas. Payments to people through the Status Resolution Support Services program (or SRSS) were cut from $246 million in 2016-17 to $140 million the following year and then progressively down to just $35 million in 2020-21, the year in which the COVID pandemic was at its worst. That was a cut in assistance of more than 85% in just four years, coming at a time when the need for assistance was increasing dramatically.

The number of people on bridging visas receiving income support payments through SRSS fell from 12,800 in February 2018 to just 1600 today. Mr Dutton was lobbied for years about the impacts of his decision but he maintained his rhetoric that the SRSS was not a welfare program.

In response, unfunded local charities, informal and semi-formal networks in refugee communities and friends stepped in to try to plug some of the gaps. State governments also became alarmed at what they saw happening in their communities and in 2019 and 2020 we saw the state and territory governments in Victoria, Queensland, the ACT, NSW, Tasmania and South Australia step in to fund emergency relief for asylum seekers and other temporary visa holders.

We at the Refugee Council really appreciate the support given by the NSW Government over three financial years to agencies such as Jesuit Refugee Service, the Asylum Seekers Centre, the House of Welcome and Red Cross.

Professor Peter Shergold as Coordinator-General for Refugee Resettlement and the team at Multicultural NSW joined NGOs in advocating strongly for this assistance and they were well supported by successive ministers for multiculturalism, including Geoff Lee, Natalie Ward and Mark Coure.

While our collective advocacy received a positive response at the state level, we failed to make any real impact at the Federal level, despite a great deal of effort. We wrote many letters, made many phone calls and had numerous meetings with Liberal and National MPs.

We received strong support from Victorian Liberal MP Russell Broadbent and, prior to the 2021 Budget, five Liberal MPs from Sydney wrote to the Treasurer Josh Frydenberg supporting our call for greater assistance for bridging visa holders and others with no access to a financial safety net. Those five MPs – Trent Zimmerman, John Alexander, Dave Sharma, Jason Falinski and Fiona Martin – are no longer in Parliament while the architect of the cuts to the SRSS program now leads the Federal Liberal Party.

Appealing to the Albanese Government to address destitution and visa backlogs

The question of what to do now rests with the government of Anthony Albanese, particularly his immigration minister, Andrew Giles. We have highlighted the destitution of people on bridging visas as one of seven critically important refugee policy issues for the new government.

Closely connected to the question of a financial safety net for people on bridging visas are the lengthy delays in the processing of asylum claims. Despite the closure of Australia’s borders resulting in a significant drop in new applications for onshore protection, there are still more than 26,000 people waiting for an initial decision on their claim for asylum. At current decision making rates, it will take two years for initial decisions on the applications currently before the Department of Home Affairs.

The delay in administrative review through the Administrative Appeals Tribunal is much worse. Without a major shake-up of the tribunal, it will take more than six years to decide on the 36,000 outstanding appeals.

This means an average wait of eight years for an outcome for an asylum seeker who does not get a positive first instance decision. During those eight years, people are left on short-term bridging visas renewed every three or six months, trying to convince employers that they can work legally and should be given a go.

We will be doing everything we can to impress four points on members of the Federal Government:

I’ll be interested to learn more today from you all, particularly people with lived experience of homelessness, and to consider how we can work together.

On election night back in May, the new Prime Minister Anthony Albanese pledged to work towards building a nation in which nobody is left behind and nobody is held back. We should take him and his government at their word and insist that people who are part of our community shouldn’t be left behind simply because of their current residency status.